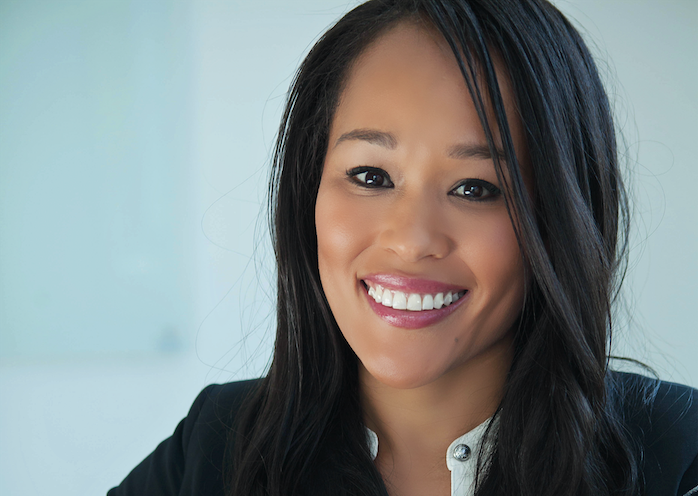 I had all of the qualifications of a “person” you see working in venture capital (VC). An MBA from an “Ivy League School”, investment banking and consulting background, etc. So why was it so difficult for me to break into the industry?

Venture capital is notoriously difficult to transition into — very few positions available (especially post-MBA) and highly competitive due to the overwhelming interest. So, I put my head down and kept trying. I was taught that if you work hard enough, and are persistent, then you can make anything happen. Ultimately I was fortunate to meet Elizabeth (Managing Partner & Founder of H Venture Partners) through a mutual friend. Elizabeth saw the potential and took a chance.

Flywheel effects typically reflect a positive attribute for a brand. It’s like a wheel on an axel, that as it spins, it grows. Below is a diagram of Amazon’s original flywheel drawn by Jeff Bezos. 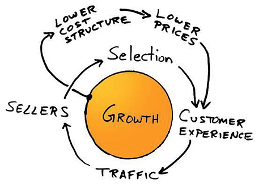 Venture capital is plagued by its own flywheel effect which unfortunately has a detrimental impact on diversity (see diagram below). 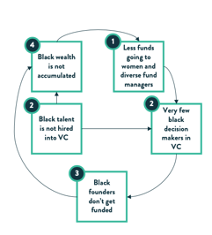 Women and minorities face implicit biases starting at the top of the funnel with the institutions who invest in VC firms, to recruiting into the VC industry, to the founders that create “unicorns” and incredible wealth and to the consumers who are able to find brands that are made for them.

In a 2017 study by the Harvard Business Review, female entrepreneurs receive about 2% of all venture capital funding despite owning 38% of businesses in the United States. Only 1% of venture-backed founders were black in a study performed by Rate My Investor and Diversity VC.

Why are these groups of founders consistently overlooked? Let’s take a look at both the amount of funds flowing to women and minority fund managers and also at who the majority of the decision makers are at venture capital firms more broadly.

(1) Wealth Managers don’t invest in female and minority owned firms. Only 1% of the investment industry’s $70 Trillion is managed by women or minority managers.

This is the root of the problem. Noted in an article by Emerging Manager Monthly, around 1% of the investment management industry’s $70 trillion in total assets under management are handled by women and minority owned managers according to the Knight Foundation.

Main Street investors (meaning investors who ultimately leave investment decisions up their wealth managers) unfortunately have very little visibility into their own portfolios. If they asked their wealth manager, “What percent of my portfolio is invested in venture capital funds managed by people who look like me?” they’d be sorely disappointed. Why does this matter? In this country, wealth is power. And change comes from two places: our democratic process and our economic engine. By the way, in private equity, both women-owned and minority-owned firms are overrepresented among top quartile performers according to the Knight Foundation.

(2) Lack of black partners in venture capital. Of the 3% of black investors in venture, 50% are at the lowest level at the firm.

An analysis by The Journal blog found that 70% of venture capital firms’ personnel are white. Additionally, of the 3% of black investors that are in venture capital, roughly 50% are at the associate level, or the lowest level at the firm, while only 2% of VC partners are black.

When asked why there is such a lack of diversity in venture capital, the typical response is that there’s a “pipeline” problem. As mentioned previously, VC is a highly competitive industry to break into — many people, few positions, making the pipeline excuse nonsensical.

In an article published by TechCrunch, Sarah Kunst, founding managing partner of Cleo Capital said: “The way to find, hire and fund black people in the tech world is the same as finding, hiring and funding any other group. You build relationships with people in that group, you seek out thought leaders from the community and learn from them, you tell your hiring and investing teams that there’s a hole in the fund’s expertise stack and you fill it. It’s not about tokenizing one person or donating to a one time effort or writing it off as a pipeline problem. It’s using the embarrassment of skills and resources these funds have to learn, build relationships and deploy capital.”

David Willbrand, Chair of the Early Stage & Emerging Company Practice at law firm Thompson Hine, said: “There are plenty of qualified African American candidates for every job opening. You know what the pipeline problem is? The problem is that the pipeline is CLOSED. First things first, most jobs are lazily filled. White guy needs to hire a manager. He’s busy. He asks a handful of friends for referrals — all white. They refer him to someone in their network — another white guy, who gets the job. None of these people are engaging in overtly racist behavior. This is a “benign” example of systemic racism at work. There are simply no black people in their network. (And by the way, it’s not benign, because these missed opportunities accumulate).”

(3) Female and minority founders don’t get funded — and consumers don’t get products designed for them: The Trillion Dollar Blindspot.

Research suggests that venture capital dollars tend to go toward founding teams that look similar in terms of gender, ethnicity, location and education, hence the lack of funding that goes to women and minority founders.

When you look at firms, the decision makers — the Investment Committee — usually made up of the General Partners or the owners of the firm — decide whether a founder gets funded or not. They look at the deals that bubble to the top. It’s important to have women and people of color on the Investment Committee and it’s equally as important to have them at the Principal and Associate levels — where the real work gets done: sourcing, screening, and doing due diligence on companies.

A study by Morgan Stanley called this a systemic issue in VC concluding that venture capitalists are missing out on a “trillion-dollar opportunity” citing that diverse customers “represent a huge opportunity to capitalize on consumer segments with plenty of room for more growth.”

A reminder of a couple of key facts this study points out:

(4) Female and black founders don’t get funded, so they don’t accumulate wealth and the industry does not change.

My hope is that as we continue to put a spotlight on the systemic racial issues in the United States, we will improve as an industry not only because it’s the right thing to do, but also because of the enormous untapped potential opportunity for investors.

I feel fortunate to be a part of the VC community — seeing an idea turn to a billion dollar business will never cease to amaze and inspire. And hopefully, as a black woman in VC, I can have a small impact on reversing the direction of the flywheel.